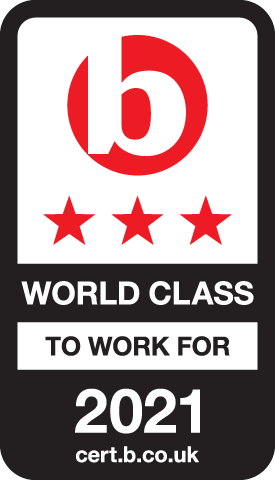 I am inspired by Inzpire Limited's accomplishment

Inzpire Limited have been awarded a 2021 3 star accreditation by Best Companies, with a BCI of 804.3. Companies like this are truly inspirational and are leading the way in helping make the world a better workplace.

I work at Inzpire Limited

Inzpire Limited have been awarded a 2021 3 star accreditation by Best Companies, with a BCI of 804.3. As somebody that works for this company, I'm proud to say that it's thoroughly deserved. 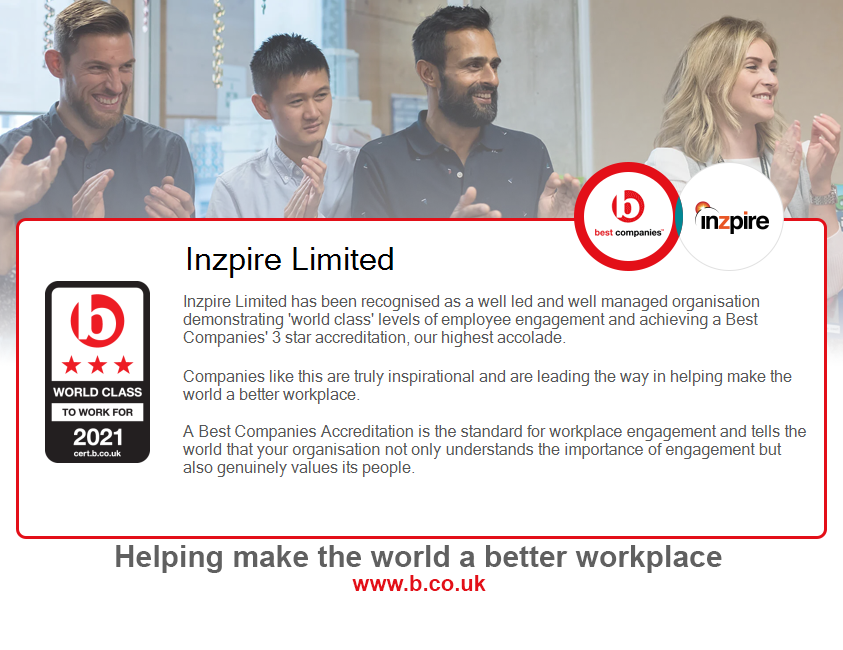 Inzpire was borne out of a conversation between three friends who were frustrated at the way the British Armed Forces were often let down by global businesses. They decided they wanted to create a revolution of honour, trust and integrity in the military-industrial relationship.

In 15 years, Inzpire has gone from three friends working in a garden shed, to a company of over 200 employees who deliver life-saving training and products to the Armed Forces both in the UK and internationally. In recent years the company has expanded its portfolio and has delivered training to a number of critical public sector organisations including the National Health Service.

Crucial to this success has been creating a happy workforce; and caring for its people is what Inzpire does best.

The company has built a supportive working environment and embraces flexible working practices, allowing its employees to work when, where and how it suits them to maximise time spent with their families and doing the things they love. In addition, the company’s employees benefit from Uncapped Leave and can take as much time as they wish away from work. Additional benefits include company-funded private medical and dental care; regular paid-for social occasions; funded training and CPD and Christmas meal allowances. Managers are also able to award ad-hoc bonuses.

Inzpire's ethos is simply about making a difference; it's not about growing big, or making the most money, it is about giving back.

"Here at Inzpire we are delighted to be a 3-star Best Company for the 7th consecutive year. This gives us confidence that we are strongly engaging our employees but also always reveals new ideas for how we can improve our employee engagement even further. We find the anonymous Best Companies process incredibly illuminating in that regard. We are very proud to have levels of employee engagement that are described as ‘extraordinary’." - Hugh Griffiths, Inzpire CEO

What is it like to work for Inzpire Limited

Leadership
97% of staff agreed:
I am inspired by the person leading this organisation

At the very start of the pandemic, a COVID-19 ‘Tiger Team’ was formed comprising of members of the Board and key stakeholders within the business. At the height of the pandemic the Tiger Team was sending out daily emails with updates on the ongoing situation both nationally and within the company, as well as providing mental health/wellbeing tips/guidance. Members of the Tiger Team also made themselves available via video chat daily to allow both individuals and groups to ask them questions. Furthermore, a dedicatedCOVID-19 email address allows individuals to raise any concerns directly with their HR team and senior leaders.

97% of staff agreed:
I am inspired by the person leading this organisation

Wellbeing
88% of staff agreed:
I am happy with the balance between my work and home life

Employees have been empowered to arrange their workload/work-life balance as suits them best during the pandemic and the CEO has repeatedly emphasised that employees can work how they wish in whatever fashion is best for their own health and wellbeing.  Many have replaced time not spent commuting with exercise or enjoying mealtimes with their families. Inzpire have ensured that if any of their colleagues do need some extra assistance, all the resources they might need are available. Advice on mental health and stress awareness has been regularly posted on the company intranet and with accompanying emails sent to all staff. Regular reminders on where to find information and how to speak to one of the 16 Mental Health First Aiders have been sent out throughout the pandemic, offering different ways of addressing any issues which might occur

88% of staff agreed:
I am happy with the balance between my work and home life

Giving Something Back
87% of staff agreed:
This organisation has a strong social conscience

Inzpire had 5 employees who signed on to the NHS volunteer campaign and did everything from collecting prescriptions to doing shopping for vulnerable members of their community during work hours. The company and its employees have also contributed financially to several charities during lockdown, both through company donations and employee fundraising. One individual took part in the Virtual London Marathon, raising over £1,000 for the Julian Campbell Foundation. During the pandemic, the company has donated over £10,000 to charitable causes including £6,000 to an orphanage in Haiti;£350 to a local U10s football team; and £500 to a veteran’s motorcycle team.

87% of staff agreed:
This organisation has a strong social conscience